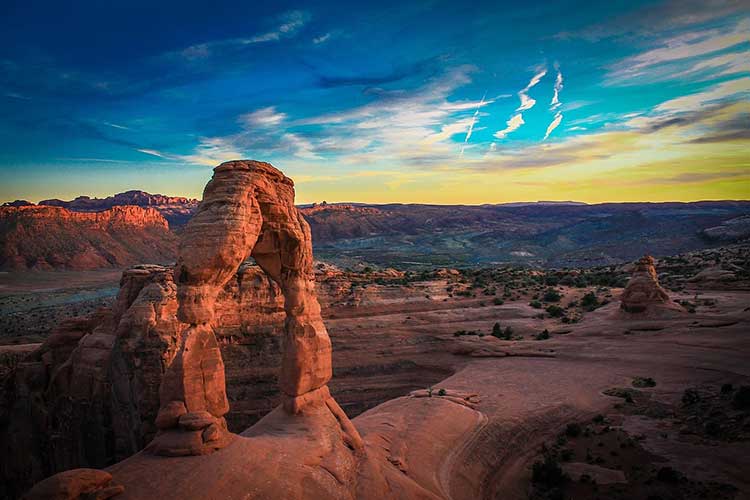 A natural arch, natural bridge or, less commonly, a rock arch is a natural rock formation where a rock arch forms, with an opening underneath. Most natural arches form as a narrow bridge, walled by cliffs, become narrower from erosion, with a softer rock stratum under the cliff-forming stratum gradually eroding out until the rock shelters thus formed meet underneath the ridge, thus forming the arch. Natural arches commonly form where cliffs are subject to erosion from the sea, rivers or weathering (subaerial processes); the processes "find" weaknesses in rocks and work on them, making them larger until they break through.

The choice between bridge and arch is somewhat arbitrary. The Natural Arch and Bridge Society identifies a bridge as a subtype of arch that is primarily water-formed.[1] By contrast, the Dictionary of Geological Terms defines a natural bridge as a "natural arch that spans a valley of erosion."[2]

The modern era of lighthouses began at the turn of the 18th century, as lighthouse construction boomed in lockstep with burgeoning levels of transatlantic commerce. Advances in structural engineering and new and efficient lighting equipment allowed for the creation of larger and more powerful lighthouses, including ones exposed to the
Next

Runcorn is a small industrial town in Halton, Cheshire, England, on the south bank of the River Mersey where it narrows at Runcorn Gap. In the town are the 60 buildings that are recorded in the National Heritage List for England as designated listed buildings in the current urban area


×You've successfully subscribed to Avant
×Great! Next, complete checkout for full access to Avant
×Welcome back! You've successfully signed in.
×Unable to sign you in. Please try again.
×Success! Your account is fully activated, you now have access to all content.
×Error! Stripe checkout failed.
×Success! Your billing info is updated.
×Error! Billing info update failed.